Through the Mang Yang Pass 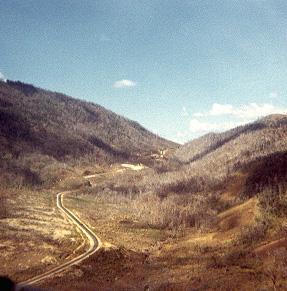 This flight was a low level Visual reconnaissance/Convoy Cover heading West into the Pass. On the south side of this road lay the rusted hulks of the French debacle of June 1954. The French Group Mobile 100 abandoned An Khe and tried to retreat to the safe haven fortress of Pleiku. Only a few soldiers and none of their vehicles made it past here. The trees look like trees that have shed their leaves for winter but these trees have been defoliated by agent orange to deny the enemy cover if they should try to ambush a convoy. 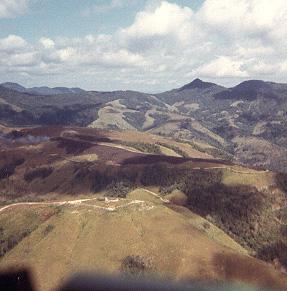 At altitude now, looking North. I believe that this is where all those grave sites are located, containing the remains of the French Group Mobile 100, ambushed by the Viet Minh on June 24, 1954. I flew many "sniffer" missions in those hills North of the Mang Yang. 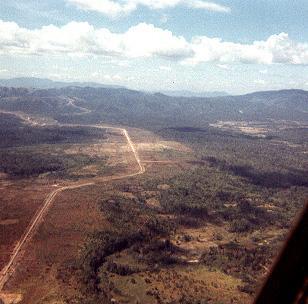 A few "clicks" West of the Mang Yang. Blackhawk Firebase was just off the left side of the photo just past where the road, QL19 disappears. 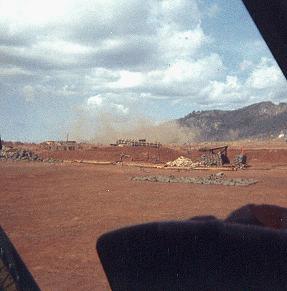 The Blackhawk Firebase refuel operation and helipad. That "tan" line is the fuel line from the 10,000 gal. bladder tank of JP-4 fuel located behind the pile of red dirt. The pump and filter-separator are located in the small sand-bagged structure. The artillery has just fired a salvo, kicking up that cloud of dust. The soil was extremely fine and when churned up by the Armored Personnel Carriers (APC) and tanks, it assumed the same consistency as talcum powder. It was 8-12 inches deep in places and was omnipresent and inescapable. 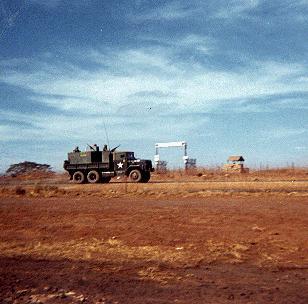 Entrance to the Firebase.

While the terrain was very open, even in daylight you were never "safe". 1st Lieutenant Haygood and I were forced to "zig-zag" into the gate of the Firebase a few days after this photo was taken, when we were fired at by a distant sniper. When we told the Captain in the TOC about the close encounter, he replied; "Oh, him again." He told his Sergeant, reading the latest issue of Playboy Magazine, to have the 4.2 mortar crew send a few rounds down into the ravine from which this guy always shot at the GI's. 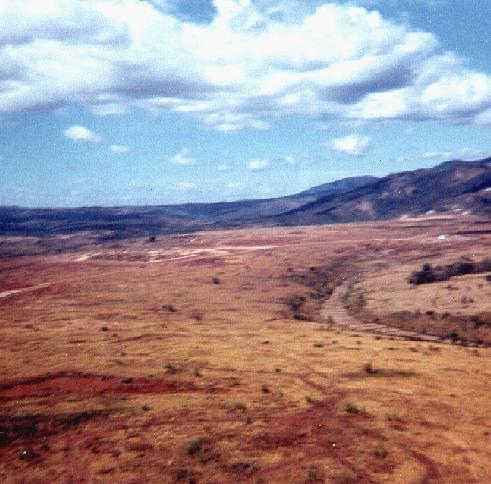 Blackhawk Firebase left of center and the "Sniper" ravine to the right. 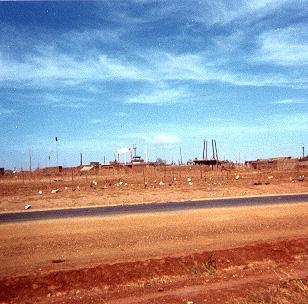 Debris stuck in the defensive wire of the Firebase. The road is QL-19 which runs from the coast through An Khe to Pleiku. I spent many nights hunkered down in a bunker there while our Huey was parked in a revetment in the middle of the Firebase. Massive 8 inch artillery kept us awake half the night, producing large bags under my eyes that sometimes seemed rival the size of the 10,000 gal. fuel bladder at the Firebase. 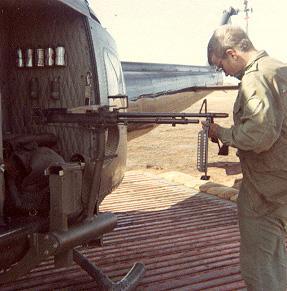 Don Wright, Crewchief, performs maintenance on his M-60 at Blackhawk Firebase while waiting for the next mission. Whenever there was a lull in the missions, our dedicated crewmembers would take care of their helicopter, their guns, then their physiological needs...in that order.

A soft-spoken and thoughtful individual, Don is now a Pastor, taking care of spiritual needs.

On the other side of the UH-1, door gunner SP/4 Ray Marple also takes time out to go over his gun. A street tough, scrappy individual from South of the Detroit area. Quick on the trigger, he never missed. He was a real asset when the chips were down.  Ray works for the automaker Ford near Detroit Michigan 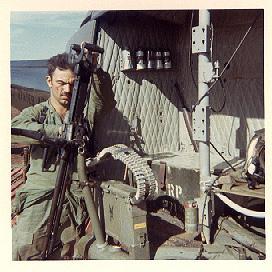 Notice the smoke grenades stored in the beer cans wired to the bulkhead. His "Chicken Plate" or body armor is under the seat in the extreme lower right corner of the picture. Notice also his rifle stowed behind his seat (footlocker). 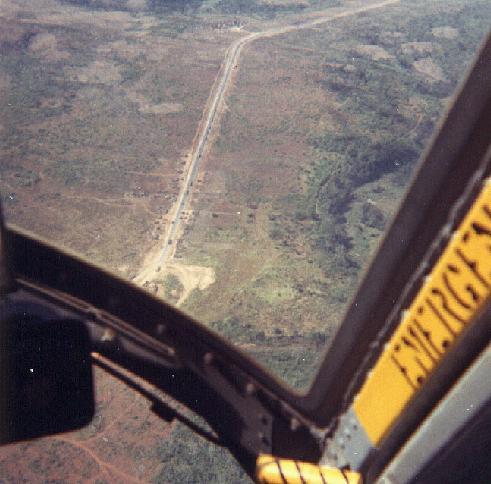 Heading East, back to An Khe. Highway QL-19 is directly below. This shot is East of the Mang Yang Pass in the vicinty of LZ Action and LZ Schuller.